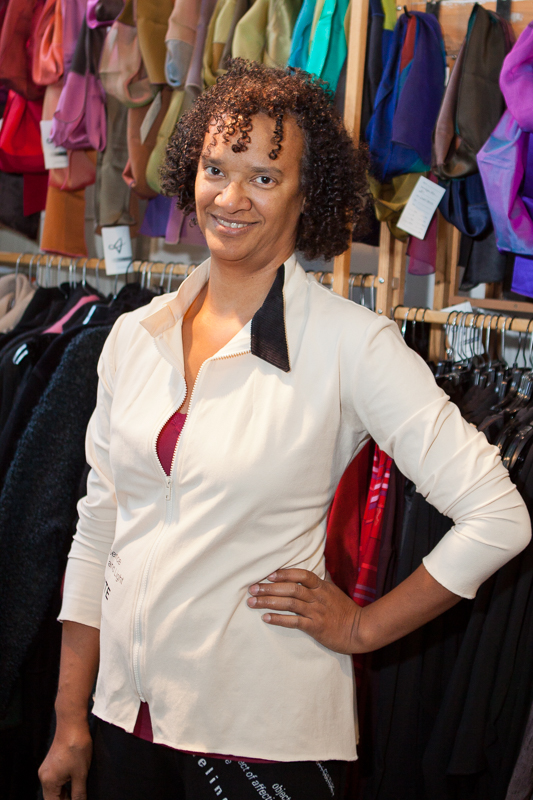 Alice Berry has worked exclusively as an independent clothing designer for thirty years, earning her degree in fine art in 1980 from the School of the Art Institute of Chicago. After school, Alice spent four years working in Paris for private clients, creating collections for small boutiques, showing textiles and clothing art in galleries, learning the business –developing a style of her own.

In 1984 Alice returned to Chicago an opened her first studio where she designed and manufactured one of a kind clothing, which was sold privately and at boutiques such as “City” in Chicago. From 1984 to 1998 Alice worked with fabrics from designers and companies such as Junichi Arai, Japan; Memphis Design Group, Italy; La Soie de Paris, France; and Fisac, Italy furthering her style and craft. In 1989 Alice married and also began to expand her business and her line, creating and manufacturing a line of knitwear, as well as a limited line of separates. The first line of scarves based on interactive color theory and texture emerged in 1993.

Alice gave birth to her son in 1995 and responding to the changing times, both personal and societal, Alice transitioned from one of a kind clothing to a line of scarves and simple, interesting clothing shapes. Her scarves, with their unique use of fabric, transparency and color, began to gain popularity and in 1997, Alice began to distribute her scarf line wholesale, selling to boutiques and museum across the U. S. and internationally. As a continuing investigation of her interest in color, texture and composition in design, Alice began works that were meant for interior and window treatments and these pieces were shown in galleries and homes. This more artistic direction of her work became a separate medium as she explored this developing interest.

To create the color scarf line, Alice works with translating concepts from Abstract Expressionist painters such as Josef Albers, Mark Rothko and others. This work has been recognized by various museums around the country such as the Philadelphia Museum, National Academy of Design, and the Weisman Museum, among others.
Alice Berry Studio was a retail presence on Chicago’s Gold Coast in the 2000’s with a dedicated store within the boutique Only She, and later in her own salon in Tree Studios.  In 2008, Alice was the first independent designer to have a showing within Fashion focus, Chicago’s fashion week, (to see video from the show please go here)
After discontinuing the clothing line in 2010, Alice continues to produce the scarf and shawl color line, as well as a series of hand silkscreened fabric designs on a variety of materials, including wool challis and wool and tencel jerseys, silk charmeuse, satins, and chiffons. This screened yardage has patterns/motifs/symbols and poems/text drawn and written by Alice, and the studio is incorporating it into shawls, T-shirts, and the linings of one-of-a-kind garments.

In the fall of 2011, Alice began a “sabbatical” of sorts, entering Roosevelt University to pursue a Master’s in Clinical Psychology (Counseling Practice). She completed her degree on August, 2014, became a Licensed Professional counselor in March 2015, and has begun a private practice specializing in counseling artists and creative professionals, (please see aliceberrypsych.com for more information). As a continuation of her work on perception and color, she created a conceptual artwork, Tx~Art, relating the artistic space and the therapeutic frame, and how these two mental fields are perceived.

Sometimes it takes a while to find the work that resonates with who you are. As for me, after years of making clothing for private clients as well as for the retail market, I came to my scarf line as if by process of elimination. Coming out of baby land from the birth of my son, I found the only requests from the stores I had been working with were for the scarves I had begun to do as a sideline a few years before. As I developed the line, I found myself understanding the relationships between colors and textures in a more profound way, and I began to look with a fresh eye at the work of the abstract expressionists as well as the work of the artists and designers of the postwar bauhaus, particularly Josef and Anni Albers, who systematized a way of looking at color that was logical, as well as encompassing the emotional experience of really considering color. Over the past several years I have come to realize that color is experiential, and belongs to the same realm of experience as listening to music. I think color and light are related to each other in the same way that music and sound are related. The seeing of light or the hearing of sound is essentially the perception of vibrations by the ear or the eye. In working with the colors in relationships as I do, I think of them as compositions working in the same way as a group of notes creates a chord or a phrase of music. I realized that many of the terms describing color and music are interchangeable. One refers to tonal or atonal musical compositions, or harmonious or discordant colors. I continue to explore and be amazed by the relationships between colors and the idea of color in the world, and I hope to learn new ways to express it through my work.

After 30 years in the fashion business, and another 15 or so making visual art, I took a break. I realized that a lot of my work had to do with perception and cognition, and so landed in a MA clinical psychology program that allowed me to think about the way we perceive our place in the world as well as how to interact with people in a therapeutic fashion. I realized that seeking to understand cognitive processes was a common element of my work over the years and saw that I was asking the same questions in different contexts. How do we know what we know? What biological, psycholgical or social influences create what we think of as knowledge, or understanding, or desire? Just as whether we think red is the color of a strawberry or blood or lipstick or a fire truck depends on personal formation and perception, whether we realize and agree we are in a therapeutic situation varies according to our influences and ideas about what, when and how therapy happens. Perception is all.